The Bachmeier or Yellow Castle was first mentioned in 1434. The small property was owned by the papermill before it was acquired in 1695 by the Nuremberg patrician Johann Friedrich von Trill. During this time, it was extended considerably and after a few changes of ownership in 1855 came to the Bachmeier family. Since 1890 it is owned by the Conradty family. After some renovations, however, the formerly characteristic yellow was not used in the facade painting. 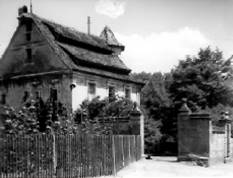