Until 1810, the children from Röthenbach had to attend the school in Mögeldorf, then the school in Rückersdorf. In November 1874, the municipality purchased a property from the Royal Forestry Office where the first Röthenbach school building was built. The opening of the school, which was attended by 69 children, took place on January 3, 1876. Due to the strong population increase, the school soon became too small. In 1898 the second school was built in the former school garden. The two school buildings are still standing today: the first school house now houses the construction department, the other is used by the city as a youth center. 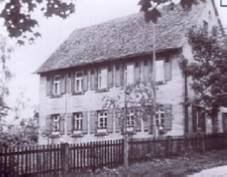