Neo-Gothic vaulted hall church with a nave, glass windows by Walter Crane in a choir.

Since 1911 Röthenbach is an independent Protestant parish. Before 1904 the worship services took place in the children's home, in the school and in the vicarage, afterwards in a prayer room. In 1909 the construction of the Protestant church began according to the plans of architect Hauberrisser from Regensburg. The financial resources were provided by a generous donation by Friedrich Conradty as well as by state subsidies. The consecration took place on 17 May 1914, on the occasion of the 40th anniversary the Gotteshaus received the name "Heilig-Kreuz-Kirche". 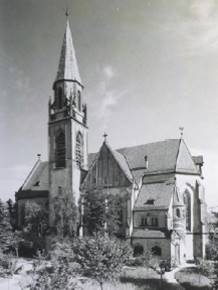