The "green tree" had been a Schenkstatt since 1526 and survived the 30-year war undamaged. In the 19th century, the restaurant was a well-frequented restaurant and the center of Röthenbach's summer pastries. Since the Gemeindeedikt 1818, which for the first time enabled Röthenbach a limited self-administration, the municipal administration was housed in the house of the respective mayor. During the office of Mayor Otzmann and Wittmann the administration was therefore in the "Green Tree" for many years. 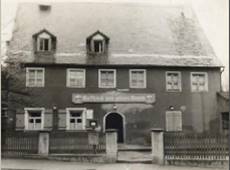